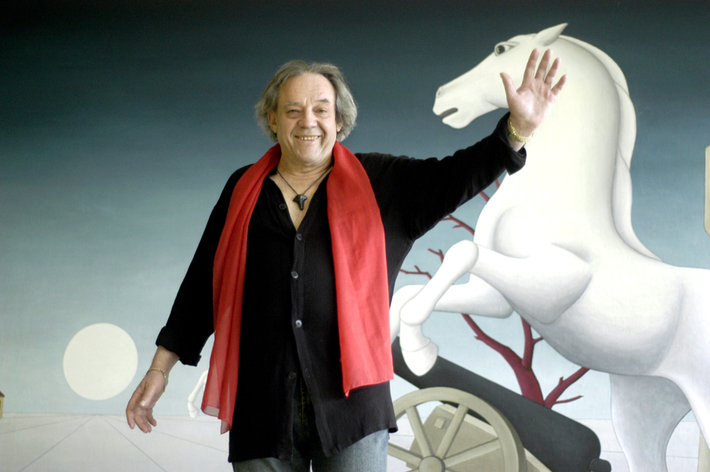 Ladislaus Weiss has not received any gifts yet

What is ART?
Art is a "to-be-dictation", and never "handcrafts volition"

About: Ladislaus Weiss
Born in 1946.03.15 in Novisad / Serbia.
Relocated to West Germany 12 years later.
1966-1967 Studied Painting at the Merz-Akademie in Stuttgart from
the following Year at the " Freie Kunstschule Stuttgart "
and the " Staatliche Akademie der bildenden Künste Stuttgart
"Art University Stuttgart"

1972 Ladislaus Weiss had his first single exhibition in Stuttgart- Böblingen.

1975 Ladislaus Weiss meets the philosopher Hans Krämer, who taught philosophy & ethics in Tübingen. Krämer made Weiss his only private scholar. He became a big influence in Weiss' life as well as a friend to his present day.


1977 The The prestigious "pictor doctus" title is being awarded to Ladislaus Weiss by his mentor Hans Krämer.


Many exhibitions did follow in Germany and in other countries (Austria, Italy, Holland, France)

1983 - 1986 Weiss founded the "civic school of fine arts" Herrenberg/Stuttgart
There he was the director of studies for fine arts. 1988 Ladislaus Weiss also successfully founded and led his own private "Free school of fine art" Stuttgart/Böblingen which he eventually turned over to one of his Master Scholars.

Aside the books devoted entirely to his art there are numerous publications such as dictionaries and catalogues (in Germany and foreign countries) giving him honorable mention.


1992 - 1995 he was working with his school of fine arts Böblingen/ Stuttgart in collaboration with George Washington University, Wilmington Delaware. He received the designation of "Doctor honoris causa" (honorary doctor) PhD.

One cannot say that Weiss retrats to some kind of a private mystilism with his escatological landscape. weiss strives to transform vision into symbol - laden paintings but at the same time provides prelise evaluation of a position determination regattoind present and its reference to the future. his concern for the medium of art is a reflection of the epoch as an historical factor - line it has been done in the field of literature, philosophy and also science with other means of terms. weiss is a pictor doctus, a learned and adaptive painter, well - versed in the essentiacs of historical and cultural philosophy.

Hans Krämer was teaching Philosophy at the University Tübigen (1976-1994)and than as guest professor in Vienna (1995). He was writing about 10 books 30 scientific essay. All his works were translated in different languages and is honorary citizen of Syrakus (city of Platon)

Center of his works were Philosopy, Ethics, Hermeneutik, theory of historic science and aesthetik.