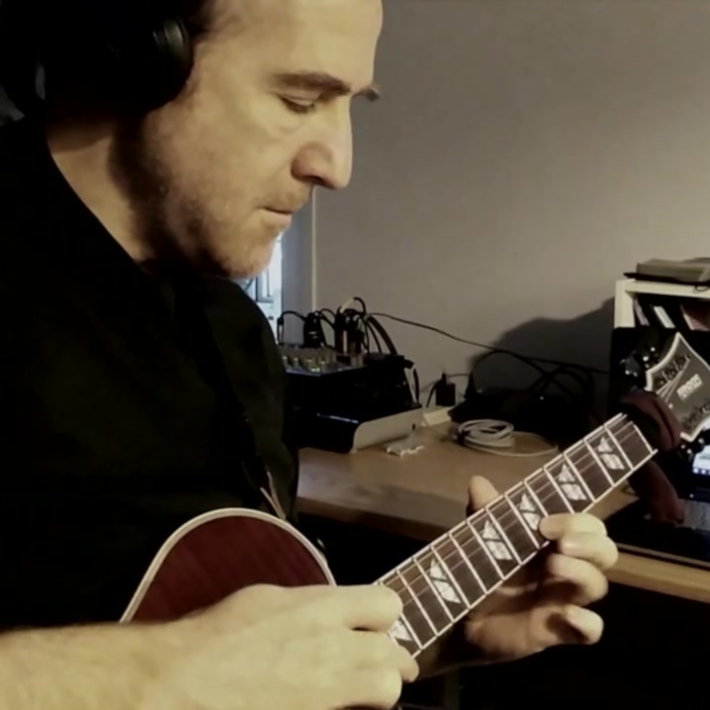 the impulse that drives artistic expression is irrational, unconditioned, and impersonal. it is beyond the grasp of reason and its constructions, which allows it to make the being resonate at frequencies that reason is not able to reach, and thus initiate it into experiences that are beyond his comprehension.See More
Aug 2, 2020
0 Comments

Essentially written in one day in March 2013, « One Of A Kind » is an upbeat folk pop summer song about meeting someone who turns out to have special significance in one's life, and eventually becoming so close as to form a kind of unit with them.Ultimately, it's also about how every encounter, whether apparently desirable or otherwise, actually contributes to one's growth and to finding one's place in the grand scheme of things. Here are the lyrics :verse 1i was lonely you were alone silent…See More
Jun 9, 2020
0 Comments

tell me i did not dive in way too deep and that i will find the relief i seek when bells toll the time to jump off the peak say that there will be faith to take the leapalthough i've walked the path of oracles and seen you've kept the oath you'd said you'd keep when the fruits will be close enough to reap will i really believe in miraclesdid your plan really include that last turn or did i miss a lesson on the road will there some day be nothing more to learnnot knowing the cost in merit to…See More
May 5, 2020
0 Comments

as i sit on the floor and bow my head i wonder why my path has led me here for which purpose must i be rid of fear that lies in store for me somewhere aheadno way could i the turns have all foreseen nor prayed for all of life's given blessings for the angels would not reveal their wings until after the time they could be seenis it a door i hear, a voice, a pace or only an echo, a whim, a wraith a breeze, a thought, a threat without a facebe still my beating heart, oh do not race stay with me in…See More
Apr 6, 2020
0 Comments

now that the truth is out and edges the windup say did you really doubt of where you would end upjust right there where you are all alone in the night feeling more fraud than star and really not that brightnot completely grownup more bewildered than fine but still the wait is up time to come forth and shineseems you blew your thirties in healing from your teens in bending to worries and in blaming your genescloistered in priory yet life was not tranquil your want was fiery unending test of…See More
Apr 5, 2020
0 Comments

was it not all written in the divine memoirs on the nightly heaven as a pattern of starsthat the worst could happen at the perfect hour to rescue the fallen from haughtiness dourso that they could in turn save from the bonfire their fellow men who burn in confusion direwas it not all written well ahead of the time in words aptly chosen metered and set to rhymethat there's no simple way to rekindle nature but take what from the day provides shallow pleasureso that there's no option but to renew…See More
Apr 4, 2020
0 Comments

Christopher Stewart has not received any gifts yet

Music and Spiritual Practice - An Overview of Poligraf

Music has been an essential part of my life since the end of the 80s.

The adventure began during the second of my four years of studying electrical engineering at Université Laval in Québec City. Through various friends and contacts I reconnected with progressive rock, a form of music to which I had already been exposed to in my youth thanks to my older brothers and sisters. Hearing the music of bands such as Yes, Rush, Genesis, and King Crimson felt like meeting old friends, and quickly I knew I just had to do as those musicians did, although my prior experience with music had been minimal at that time.

The feeling was so strong that not only did it led me to buy various instruments so I could learn how to play, but it was also the main force that made me decide to change direction after my first semester as a graduate student in computer vision and systems so I could build my life around music. And perhaps more importantly, when it became clear that I would compose music of my own, it spawned the question « what should the songs be about ? » which powered me into many years of exploring a multitude of domains of knowledge including science, philosophy, psychology, art, mysticism, and the occult.

Music for me is also spiritual practice. The inspiration and elevation it provides is undeniable, and the many insights I have had while practicing an instrument or rehearsing a part are too numerous to recount. Music picks me up when I let reason bring me down, restores my energy levels when I feel tired, sustains me through lengthy work sessions, and generally brings me to a state of inner peace and deep joy.

My objective as a musician is to communicate that energy in the hopes that listeners will experience that very same elevation and inspiration. It is also my intention to share my experiences and discoveries and thus hopefully help others reach understandings that can they can use on their own journey.

Buddhism has been an essential part of my life since the mid-90s.

The adventure began when I stumbled upon a feature in an encyclopedic dictionary that highlighted the Four Noble Truths. That finding immediately sparked my curiosity and a few days later I was buying a copy of The Dhammapada at a local bookstore. While slowly digesting the aphorisms in the weeks that followed, I found that its teachings were in continuity with a process of introspection that had begun during an introductory course on neural networks (i.e. systems designed to emulate some of the capabilities of the human brain, such as pattern recognition and associative memory), the study of which had triggered the question « what does this tell me about my own inner workings ? »

From then on I pursued my explorations and plunged into the Tibetan Book Of The Dead, which was quickly followed by various Mahayana sutras. I also bought a guide to learn how to meditate and started experimenting with the practice.

During the years that followed, I plowed through most of the major Mahayana sutras, progressively adjusted my lifestyle and behaviour to accord with the precepts, refined my meditation practice, memorized mantras, and became a vegetarian.

Poligraf has been an essential part of my life since its inception at the beginning of February 1998.

The adventure began after the collapse of a band that arguably never really existed as it only had a handful of rehearsals, but for which I had already written a lot of material. Left alone at the helm, I connected with a group of experienced musicians via a co-worker friend and after agreeing on a general aim and formula, we raised sail and headed to the terra incognita of progressive rock.

Over its eleven years of activity in various incarnations, Poligraf has yielded enough music for over five full-length albums, but never really had a chance to officially record any of them, although some of the material has been demoed and performed on stage on various occasions.

Most of the music documents my own spiritual path and presents some of the lessons that life has taught me on the way. Some pieces are directly inspired by Buddhist texts or teachings. For instance, « Between Worlds » is directly inspired by the Tibetan Book Of The Dead, and « The Idler » and « Creeper » have been inspired by aphorisms of The Dhammapada. « Void » illustrates the Buddhist concept of emptiness, and « SubjeKctiv » serves as a reminder of the subjectivity of experience and the coextensivity of worlds. « Entering the Stream » is a trilogy, counting a total of nine chapters, that depicts the trajectory of an individual fed up with the mundane who decides to retreat into an ashram for some heavy introspection before returning to the ordinary with a renewed perspective on life.

Throughout all these years, if the Mahayana has provided the vehicle, then Poligraf has certainly provided landscapes, path, and drive, while the buddhas have completed the picture with their timely, serendipitous, and often magical interventions.

I don't know why I feel so strongly about music, progressive rock, and Poligraf in particular, but I just know I do and I trust that feeling to the best of my ability. My connection to Poligraf runs so deep that whenever I let hardships or circumstances turn into reasons to believe that there's no viable future for the band, then I retreat into apathy. That is, until that unmistakable feeling breaks through the veil of confusion to drive me again. To the best of my present understanding, my own self-realization seems to be linked to that of the band, if not as the culmination of my spiritual practice, then at least as an essential stepping stone towards it.

March 2020 Update: Poligraf is currently hibernating, and probably not coming back to life, at least for the foreseeable future. Still, I have been writing new music steadily since the band was last active, a mix of songs and instrumentals influenced from progressive rock and which have been written for Poligraf, and also singer-songwriter tunes that are closer in their essence to folk-rock or even pop, pieces for solo classical guitar, and occasional electroid experimentations.

If you'd like to know more about my musical activities and support me in my efforts to bring more artistic beauty into the world, please visit my website (see the first icon below) where you can learn more about my various projects.

For me, your support represents an opportunity to go to the next level, reach a wider audience, and ultimately become a self-sustaining music producing unit that can function independently of a record label.

Thank you for reading thus far, and best wishes to you on your journey.

the impulse that drives artistic expression is irrational, unconditioned, and impersonal. it is beyond the grasp of reason and its constructions, which allows it to make the being resonate at frequencies that reason is not able to reach, and thus initiate it into experiences that are beyond his comprehension.

Essentially written in one day in March 2013, « One Of A Kind » is an upbeat folk pop summer song about meeting someone who turns out to have special significance in one's life, and eventually becoming so close as to form a kind of unit with them.

Ultimately, it's also about how every encounter, whether apparently desirable or otherwise, actually contributes to one's growth and to finding one's place in the grand scheme of things.

Here are the lyrics…

Allegory of the Long Spoons

« The allegory of the long spoons is a parable that shows the difference between heaven and hell by means of people forced to eat with long spoons. »

« In each location, the inhabitants are given access to food, but the utensils are too unwieldy to serve oneself with. In hell, the people cannot cooperate, and consequently starve. In heaven, the diners feed one another across the table and are sated. »

« Given the same level playing field one group of…

dare i reveal how we have been misled
by values that want us to be apart
told only a fool could follow their heart
by demons of greed, reason, and hatred

Irit Hakim-Keller said…
it had indeed...:)
thanks

Irit Hakim-Keller said…
your music is beautiful, Chris. i have played it while was working on some greeting card .
thank you.