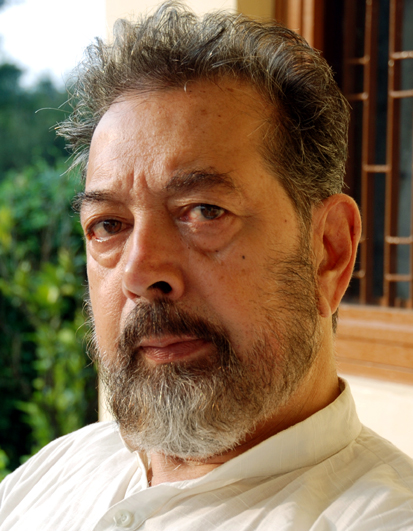 kashmiri khosa has not received any gifts yet

What is ART?
Art is to entangle the self with the basic stuff of reality.It is to get out of our time bound egoes and enter the world of universal energy.Can there be any other purpose of art than to convey this energy.

A few words about the artist

Khosa has been working as a professional painter since 1962.He has held more than ten solo exhibitions of his paintings at Delhi, Kolkota and Mumbai. Having used ink, pencil, oils and acrylics, he has participated major national and international shows in India, bringing him the “National Award” in 1981 and President of India’s silver plaque in 1974. His paintings have been auctioned by Osian’s auction house in India from time to time and many other charity organizations including Helpage India. To trace his growth as an artist, his paintings can be found in the significant collections of the National Gallery of Modern art, lalit Kala Academy, Sahitya Kala Parishad of Delhi, International airport authority of India and numerous private collections in India, America, Canada, Dubai, Hong kong, Singapore and Europe.

His artistic enquiry has impelled him to collaborate with his contemporaries in poetry, literature and theatre. Such concerns also brought him the department of culture’s senior fellowship ( 1979- 82 ) for “ Integrating the visual language of art and content and coordinating it as a whole”. His paintings along with his concerns have been extensively published throughout the country including the paintings reproduced by the International Design journal ( No.42 ) Seoul, Korea. Among the most prestigious, an extensive interview along with the reproduction of paintings was published by “ Temenos 13” an international review journal devoted to the “ Arts of the Imagination” published from London. Attended many art camps at national and international level. Represented at sixth Babylon International Festival of Art in Iraq 1994. A slide presentation of the three decades of his paintings was held at an International seminar of The Indira Gandhi National Center of the Arts arranged in collaboration with the Millennium Trust of Britain in 2004. Recently participated in an exhibition of sketchbooks by Arthouse Gallery of Atlanta and the same being exhibited in other eight cities of USA.

A 28 min. documentary on the life and work of K.Khosa was released by the national channel of Doordarshan including the DD world and the Prasar Bharti Channels in 2003-2004.

Your work is really amazing and exquisite!!!!!

This gallery is a nurturing ground for artistic talent. And we welcome Artists to upload their artwork.
We will showcase, market and sell your art on our website , while the artwork would remain in your possession.

Ajit Vahadane said…
Dear Mr.Khosa,
I wish you exhibit your unique artworks in our 9th Indian art exhibition in Jakarta,Indonesia.

Many of the artists have requested us to extend the date for accepting their entries as couriers and post deliveries may take time to reach our Mumbai address.

Now revised schedule is as followed

1)Last date of recieving entries is now 15th of May 2009.Artists should read and agree to all rules and regulations about exhibition in NEXT EXHIBITIN section by clicking on following link http://www.indianartistsnetwork.com/nxt_int_exhibition.asp
or visit our website wwww.indianfinearts.com and click on NEXT EXHIBITION section on the top.

4)All artists paintings will be framed in Jakarta and each price tag will be carrying artists contact numbers and email addresses so that art buyers can contact artists directly.Full amount will be paid to artists without any comission to anyone.

4) The selected paintings and contribution of Rs.20000 should reach us our following Mumbai address by 5th June 2009.No schedule will be changed after this.

Artists can still send their entries by email to admin@indianfinearts.com. Artists should send the images of artworks by separately attaching them to their email along with file of resume in wordfiles.

Address for sending CDs/Paintings/contributions etc is

DRAFTS FOR RS.20000 PER ARTWORK SHOULD BE MADE IN THE NAME OF "INDIAN ARTISTS NETWORK"
PAYBLE AT MUMBAI.

This year our exhibition will be a part of Indian Embassy's grand Indian cultural festival in Jakarta.

Now our exhibition will be held in Four seasons Hotel in Jakarta in their huge exhibition lobby during Indian Embassy’s Indian Food festival.Our H.E.Ambassador has asked us to exhibit during that period and we have agreed for the same.Indian embassy and cultural centre will be inviting thousands of VIPs, Staff of various embassies and Indian/Indonesian business comunity for their food festival with lots of publicity in media.This is a great chance for us to exhibit their.Huge impressive lobby of Four seasons Hotel conducts art exhibitions on regular basis.

Wishing you all the best and expecting to recieve your highly creative entry soon by post or through email.

zalans said…
Art is miracle - I`m only Man, who enjoy my only Life and producing illusions.
Thank you Khosa and stay connected for future,

Dr Ritu said…
Hi,
Join me for the new era of art requesting you to log in and register at www.globalartcollectors.com