Renowned artist and author Yusof Gajah,otherwise known as Mohd Yusof Ismail,roams the plains of human imagination to produce elephant-inspired artwork on canvas. He talks to Grace Chin about the importance of naivety and dreaming and living the life of his iconic Gajah characters.

There are elephants in the living room, on the coffee table, in the kitchen. With their beady, curious eyes and boldly coloured lithe trunks, they tease and taunt, inviting viewers to join their universe…which is exactly what artist and author Mohd Yusof Ismail, better known as Yusof Gajah, has done.


To the artist, fired by passion and childhood ambition, each canvas becomes a dimension of his imagination and allows him to enter into the realm of daydreams. His characters are acrobatic performers or graceful dancers, and yet are awkwardly contorted, startling with their beady-eyed innocence.


The elephant man’s artwork brings to mind the animated cartoon characters of the 1980s – the adventurous spirit of the Rupert Bear and Teddy Ruxpin, the eagerness of Aloysius Snufflleupagus from Sesame Street and the watercolours of Care Bears. However, your interpretation of the paintings may vary, Yusof points out, like how a gardener, an architect or a
businessman would view a piece of land differently.


But as a vivid imagination is universal, Yusof’s elephants can be found in many corners of the world. In fact, the much-talked about bright colours and lively characters of his works has found avid fans in

Scandinavian tourists. Meanwhile, his black-and-white variations are all the rage among German and Indonesian collectors.

Yusof has held exhibitions in Indonesia, Thailand, Japan, the former Czechoslovakia, Norway and Sweden and his works have found a home in the private collection of the Yang di-Pertuan Agong Sultan Mizan Zainal Abidin,

The National Art Gallery, Galeri Petronas and many multinational corporations.


I meet Yusof at his studio, a converted terraced house nestled in the serene neighbourhood of Taman Greenwood in Batu Caves, Selangor. He greets me warmly one fine morning despite the fact that he is recovering from a bout of gout.


We have our chat in the living area. His manager and wife Zakiah Mohd Isa sits in on the interview but leaves after a while to do something else. Still, as Yusof opens up about his art, one cannot help but feel that the pachyderms on the walls are listening in on our conversation.


Like his creations, Yusof is a diminutive figure, but his gentleness and calmness remind one of the majestic animals. The 55-year-old received his art training in Indonesia in the 1970s and has found fame on Malaysian soil and overseas for his artwork and illustrated publications for
children.


Yusof says his journey into the world of pachyderms started when he was seven. He remembers his childhood in Negri Sembilan and Singapore in well-loved volumes of sketches. “I was quite naughty and used to wander around…I loved nature and biology. My parents had to replace many exercise books that I filled with my drawings,” he laughs.


As a child, he was intimidated by an elephant on whose shoulders he rode. ”I was small then…they were gigantic animals to me,” he chuckles at the memory. “Then, when I visited the temples of Borobudur,Indonesia, I found many elephant icons and sculptures. That is when I started sketching them…But that didn’t turn me into elephant man.”


As the story goes, the Gajah moniker became about after he became part of the multi-disciplinary art collective Anak Alam, which had two Yusofs. To distinguish himself from his fellow artist Yusof Osman, he
adopted the name Yusof Gajah, which then appeared in an exhibition catalogue.


Over time, elephants became the central subject of his work and a part of his identity as an artist. Put simply, Yusof became Yusof Gajah on canvas and the illustrated world of his anthropomorphic elephants is Yusof’s universe.


“My personality is in the elephant,” Yusof says, gesturing towards the walls of his studio. “It’s like a bowl of rice. You can make fried rice or eat it plain. I have wondered if I would ever run out of ideas of what an elephant could do, but no…my elephants can do more…”


“I had a happy childhood,” says the artist who grew up in Johol, Negri Sembilan. “I dreamt of being an artist and it came true. Now, I
want to keep on dreaming and encourage people to dream…to imagine…”

Being an artist was unheardof in the 1960s, when Yusof was just starting out. “ Getting a white-collar job was more important than being an artist then,” he recalls. “Singapore was good for me. I visited art galleries and libraries on the island and filled my sketchbooks with newspaper
cuttings of art-related news and articles from the weekend edition of New Straits Times.”


People are afraid to dream, he continues, because being ambitious and wanting to be a high achiever is discouraged by a society that thrives on mediocrity. But dreamers should be stubborn – that is what got him
to where he is today.


A dreamer he may be, but Yusof also appears to be firmly grounded in reality. His mentor, the late Pak Widayat, left him a nugget of advice about being an artist. “What is a painting, I asked him, He said, ‘Paintings should be on a wall.’ This is a famous artist, who did not (answer
by telling me about) the philosophy of art.”


Although it was never explained to him, Yusof says he later realized what Pak Widayat meant: there will always be a market for art.


“I cannot lie and pretend that art is for art’s sake. It is my main source of income. I paint with my soul and my heart, but I have to be a businessman when it comes to selling my paintings.”


Through the years, a sense of idealism has remained consistent in his work but Yusof has matured in his approach to art. He started looking at the branding aspect and identity of his work in his twenties and
when he turned 40, focused on making art means of providing for his family. A
decade on, he worked on acquiring an art studio. Now, Yusof is looking into the
future and planning to build a dedicated museum to develop and compile
documentation on his legacy.


“I have to keep expanding. I can’t just stick to expressionism, minimalism or abstract art my whole life. Other artists stick to one style. The elephant is the main icon for me and I can play around with it.”


The multiplicity and versatility of the icon ensures that he appeals to a wider market, he says. A landscape painting can be in a living room, a smaller framed piece could possibly find itself in a child’s room. “If you stick to just one style, [you may not find yourself in a child’s room…]” 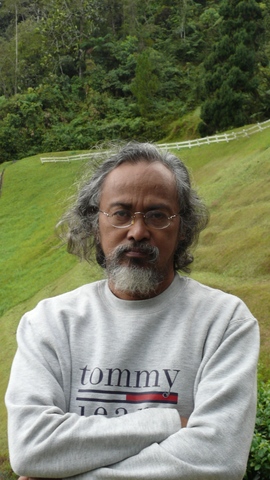 The soft-spoken, bespectacled Yusof has taken his art into a new area – children’s books. To date, he has published more than a dozen illustrated books for children and has been recognised locally and internationally
for his talent. His biggest achievement was being awarded the top prize in the
Noma Concours Children’s Picture Book Art Competition in Tokyo in 1996. The
competition was organised by Asia-Pacific Cultural Centre for Unesco.


“It’s fun to write for children. To write a good book for children, you have to be a good storyteller. You have to love children and play with children,” Yusof says. It is a challenging task and a continuous learning
process even for his veteran.


He was clueless when he first started, Yusof confesses, thinking that it could not be much different to paint and illustrate a children’s book.


It is easy to think an artist can just draw inspiration from his childhood, but the truth is, much research is needed to produce a simple illustration. It sometimes requires coming out of the comfort zone, as hard as it may seem.


For example, Yusof traded his paintbrush for flippers and scuba gear to go diving in the deep blue sea, all in the name of producing a 22-page series of underwater illustrations. Another title that he is working on has been revised three times over the last five years, based on a character he loosely refers to as the Garbage Monster.